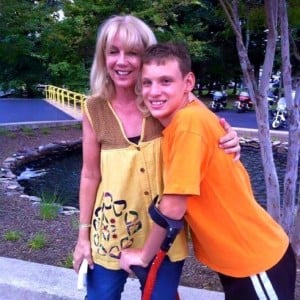 Kelly Hennessa, a Reston native and 1978 graduate of Herndon High School, is continuing to recover after a car accident in June left her in a coma for months.

Aiding in that recovery: her teen idol, David Cassidy.

Hennessa, who now lives in Prince William County, was severely injured when she and her son Carson were headed to get ice cream there on June 1. Hennessa suffered a severe head injury and was hospitalized for months.  Her son Carson, 12, suffered broken bones and other injuries.

Which brings us to David Cassidy. To help Kelly during her recovery, her husband, Greg Powell, would play his wife’s favorite David Cassidy songs for her.

Kelly especially liked the song “I Think I Love You,” and her husband says he would always see a small grin come to her face when the song played.

Earlier this week, she got to meet Cassidy prior to his performance at Alexandria’s The Birchmere. See the full story in this clip from Fox5.

Friends are still offering lots of support for the Hennessa, who is on leave from her job as a special education teacher at Centreville High School.

More than $45,000 has been raised on a Go Fund Me page started by a family friend to help the family with its growing medical expenses. Hennessa requires 24-hour care at home and struggles with cognitive impairment and speech difficulties, according to a message on the Go Fund Me Page.

The family may also have to modify its house for accessibility modifications, and is still paying the surgeons, ambulance, medical helicopter and hospital bills from the initial car crash.