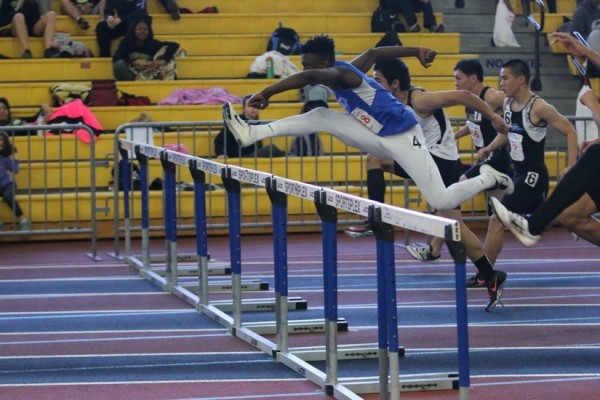 Other highlights from the meet were victories in the boys’ and girls’ hurdle events, two school records, a second-place team finish and qualifying all six relay teams for the state meet.

The boys finished second to Alexandria’s T.C. Williams High School in the 26-team field while the girls were sixth. The top six finishers in each event earned a spot in next weekend’s 6A State Championship Feb. 26-27 in Hampton.

Junior Devyn Jones is also a region champion, winning the 55 hurdles in 8.40. Junior Nikayla Hoyte and sophomore Olivia Beckner advanced to states in individual events with school-record breaking performances:
Hoyte ran a 7.28 in the preliminaries of the 55 meters and advance to the finals, where she finished sixth (7.35). The previous record of 7.31 was set by Lachelle Wallace during the 2008-2009 season.

Jones and Hoyte teamed with freshman Cara Hutson and Lena Weimerskirch for fourth in the 4×200 meter relay (1:47.47), qualifying the team for the state meet. Jones, Beckner, Kumi-Darfour and freshman Sophie Halkett ran a 4:03.77 for second in the 4×400 meter relay.