Justine Klena, who has served as principal at Herndon Middle School since 2008, has been named the Fairfax County Public Schools (FCPS) 2016 Outstanding Principal and is a finalist for the Washington Post 2016 Principal of the Year award.

Klena is praised for providing the necessary support for each student to succeed academically as well as socially; staff members encourage students from all backgrounds to engage in activities including performing arts, National Junior Honor Society, Spanish for Fluent Speakers, and higher level classes. 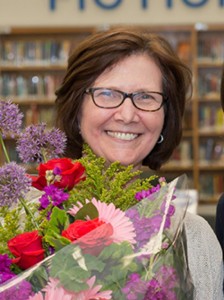 “Justine exemplifies what it means to be a collaborative lead,” Preston told FCPS.  “She models what it is to be a learner, promotes the best interests of students at every turn, and maintains perspective by keeping a close tie to what is happening in classrooms.”

FCPS says that from the start, Klena has set a course to make meeting student needs the primary focus and providing teachers with more support to accomplish this.

Klena has instituted professional conversations with staff members at quarterly Snack and Study meetings, invited teachers to take a course on “Differentiation for Diverse Learners,” and created an environment characterized by collaboration and trust that encourages innovation.

When the Math 8 team proposed teaching pre-algebra, Klena supported them with resources and logistics to give them planning time and authority to make decisions.

After achieving success on the required SOL (Standards of Learning tests) in 2014, 28 of the pre-algebra students, mostly English language learners, were recommended and enrolled in algebra honors in ninth grade, setting them on a course for more advanced math in high school.

Klena focuses on equitable access for all students into rigorous courses; during the past school year, 10 percent more Black and Hispanic students were taking four honors classes, an effort to make membership in those academics more representative of the school’s total population.

Klena encourages parents of students who are eligible for level IV advanced academic programs to remain at Herndon rather than transferring while helping staff members respond  to the wide variety of needs of the students.

Klena has also worked with families outside the classroom, offering support to families who live in poverty or have experienced traumatic border crossings.

“We now host a major community event to supply food to families through the Generosity Feeds program, and regular meals are provided through Herndon Helping Hands,” Klena said in a statement. The school also now offers reunification counseling, parent education, and weekend English classes for students and families.

One wing of the school is designated for the Family Resource Center.  This year, the school’s bike club gave away 22 bicycles — refurbished by Herndon Middle students — to needy families.

“She is the visionary, the planner, the problem solver, and most importantly, she is the Lead Learner,” says Cassie Eatmon, ESOL teacher, who says that Klena sometimes incorporates creative solutions to hire the most qualified staff members.

“Given the shortage of qualified ESOL teachers, for example, she has been willing to consider sponsoring pre-service teachers who have completed all but their internship for licensure.  She provides support in terms of scheduling and strong mentor teachers to guide the new teachers to reach their full potential in a less-traditional, more demanding on-the-job internship model.”