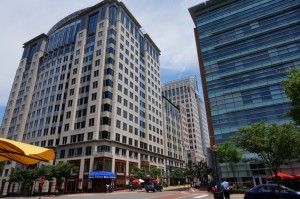 Many Reston Town Center store owners and employees have serious concerns about a downturn in business and an effect on their bottom line when paid parking is instituted at town center garages this summer.

A town center spokeswoman said on Tuesday that an app-based paid parking system is going into place in all seven of Reston Town Center’s public garages. The system is being installed, in part, to deter from drivers who are parking at RTC all day and taking a bus over to the Wiehle-Reston East Metro station.

It will cost $2 an hour to park during the day, with a daily maximum of $12, said spokeswoman Marion Myers. There will be validation, though, and parking will be free on weekends and during big community events like the Northern Virginia Fine Arts Festival.

Store owners were told of the change a few weeks ago, said Anne Mader, an owner of The Bike Lane. She said it is already hard for local (i.e. non-chain) business owners to afford a town center location. Paid parking is not going to improve things, she said.

“I absolutely think it is going to be awful for business,” she said. Mader said she is concerned about retail employees, some of whom may be sacrificing at least an hour of pay just to park for the day.

Ray Pugsley, who owns Potomac River Running, says he is furious with the town center’s decision.

“This will devastate shopping at Reston Town Center,” he said. “People will not be agreeable with paying for parking. People in the suburbs just don’t roll that way.”

Mader said Boston Properties, which owns Reston Town Center, is leaving it up to the stores to provide validation.

“We can validate for 10 minutes or five hours,” she said. “That puts pressure on us to want to make the customers happy.”

But the validation may be coming out of the store’s register. Pugsley, for one, said, he cannot afford to subsidize employee parking.

One retail manager, who asked her name not be used because she is not authorized to speak for her store, said it is her understanding that validation means the store ends up paying for the customer’s parking.

“I am worried about the bottom line,” she said. “For smaller companies, it is going to be hard. We have people who come in here, who stop by on a nice day with their dogs and kids. They are not going to do that now. Why are they going to come over here if they have to pay to park?”

May Bernhardt, owner of Mayflowers, a florist at Reston Town Center, said instituting paid parking “is the cost of progress.”

“We’re not going to go backwards,” she said. “We have to go forward. In the long run, people will get used to it. There will be employee discounts.”

Mader, of The Bike Lane, says it is progress in the wrong direction. She is a Reston native who says this goes against Reston’s principles.

“What Reston was founded on was being a community,” she said. “Of everyone having access to everything. This is putting borders up between the old Reston and the new Reston, and making things unfeasible.”

Pugsley said the national chains may be able to cope with the change. For the local owners, though, it could spell doom.

“To us local guys, this is our life,” said Pugsley, pointing out he recently closed one his stores in Rockville near paid parking storedue to falling sales. “If sales go down 50 percent and I am losing money I will be in trouble.”