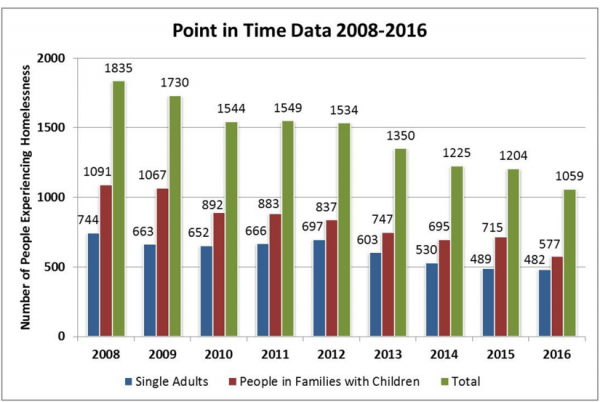 Fairfax County’s population of homeless people has decreased significantly since 2008, according to the county’s latest Point in Time Count.

The Point in Time Count is an annual survey where county personnel take to the streets, the woods and other areas to determine who is homeless.

The Point in Time was conducted this year on Jan. 28 — just a few days after the big blizzard.

Officials found 145 fewer people who are experiencing homelessness than it did in 2015. There were 1,059 people who were literally homeless in the Fairfax-Falls Church community: 577 were people in families, 482 of them were single adults.

It also found that there were 772 fewer people who are homeless than there were in 2008 — a decrease of 42 percent, says Dean Klein, Director of the Fairfax County Office to Prevent and End Homelessness.

“It is so exciting to see our nonprofits,the Office to Prevent and End Homelessness and other county, faith organizations and businesses working effectively to end homelessness,” said Klein. “It is especially encouraging to see reductions of persons who are literally homeless in many areas. This means our innovative strategies are working and that when we work together we can end homelessness in our community.”

Klein said several factors have contributed to the decline. Among them: a countywide emphasis on homelessness prevention and housing availability, as well as an unified approach to homeless services with the nonprofits and community partners.

The Point in Time report also shows there is still work to be done. The survey found an increase in older people who are homeless as well as a significant amount of single adults who are homeless:

The survey found 179 families who are homeless. That includes more than 22 children under age 11. See a detailed demographic chart on Fairfax County’s website.

The county did not release a breakdown by geographic location.

More Stories
Del. Ken Plum: A Circus ShowThanks to Our Advertisers and Sponsors