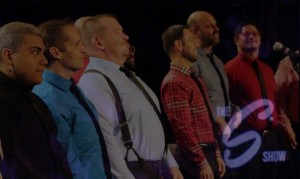 The Gay Men’s Chorus of Washington celebrates all three of those legends in one evening with soloist performances at Herndon’s NextStop Theatre April 22.

The one-night-only performance of “The S* Show” will feature craft beer and featured wines while you take in classics such as “Marry Me A Little,” “Funny Girl,: and “New York, New York.”

Advance Tickets Recommended: $25. Tickets are available for purchase online or by phone through OvationTix at: 866-811-4111

Called “one of the world’s best male choruses” by The Washington Post, The Gay Men’s Chorus of Washington DC (GMCW), led by Artistic Director Thea Kano, is currently in its 35th season.

The Gay Men’s Chorus has performed at presidential inaugurations, Symphony Hall in Boston, Carnegie Hall in New York City and the Kennedy Center Honors. Last summer, members of GMCW embarked on an historic first-ever tour by a gay chorus to Cuba.

The chorus’ outreach programs perform over 70 times a year to champion equality, and the organization now boasts the creation of the region’s first LGBTQ Youth Chorus. Learn more at www.GMCW.org.