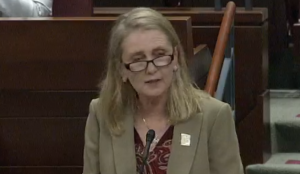 For some, it’s another potential rise in property taxes by a county government set on wasteful spending. For others, it is the cheapest option to boost county coffers for the upcoming fiscal year — but not enough to fully fund Fairfax County Public Schools.

The Fairfax County Board of Supervisors heard from people on all sides of the issue (and many with speciality interests such as foreign language immersion programs, teacher raises and mental health services) on Tuesday at the first of three public hearings on the Fiscal Year 2017 budget.

The supervisors, who have advertised a tax rate hike of 4 cents per $100 of home value, will vote on the budget later this month. Hearings continue today and tomorrow at 1 p.m. at the Fairfax County Government Center.

Fairfax County Public Schools board chair Pat Hynes (Hunter Mill) said the county, which gives about half its $3.99 billion budget to the schools, and FCPS are still about $50 million apart in funding for 2017.

The supervisors put forth options to raise taxes 5 or 6 cents when it formulated the advertised tax rate last month. Those options did not pass.

“I urge you to fully fund Fairfax County Public Schools,” Hynes told the supervisors. She outlined some of the achievements of FCPS, including high test scores and national student awards in everything from science to the arts. She pointed out that the system is spending $1,000 less per pupil than it did in 2008 and teachers have not had a market-rate pay increase in five of the last seven years.

“After eight years, we have lost ground in teacher pay and class size,” she said. “That has taken a toll. We started this school year with 200 teacher vacancies. The class size at many elementary schools is more than 30. There are no cuts that would not fundamentally change this school system for the worst.”

“The school board is often accused of crying wolf,” she said in reference to Superintendent Karen Garza’s annual statement of tight financial straits. Garza predicted the $50 million shortfall a year ago, and engaged citizens and a budget task force in surveys and meetings asking where cuts could be made.

“We saw the writing on the wall last spring and realized we had to have a conversation about cuts,” said Hynes. “It is time to turn the corner.”

FCPS teacher Precious Crabtree made an emotional plea to the supervisors.

“I work three jobs,” to afford to live and work in Fairfax County, she told the supervisors. “We all deserve better than what you have proposed and will likely not provide. Your repeated pattern of behavior documents your lack of concern. … Your actions have pulled our system from top to the bottom in the DC area.”

County citizen Charles McAndrew told the supervisors that a four-cent rise, which will represent about a $303 increase in the tax bill for the typical county homeowner, is a rate that has grown much faster than inflation.

“We have had a 27-percent tax increase over the last four years,” he said. “Are you trying to drive people out of Fairfax County with high taxes?”

Another resident,  Lou Di Leonardo, was not as gentle with the board. Speaking at an earlier part of the supervisors meeting, a public hearing on the tax rate increase, he said the school board’s annual requests “border on extortion.”

“I not pay $400 a month (in taxes) to breathe Fairfax County air,” he said. “Taxes have risen 40 percent in the last few years [due to] the school board’s never-ending demands that border on extortion.”