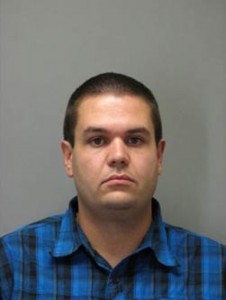 Former Fairfax County Police officer Adam Torres pleaded guilty to involuntary manslaughter on Monday for his involvement in the fatal 2013 shooting of an unarmed man at a domestic disturbance call.

The murder trial for Torres, now 33, was scheduled to begin at the Fairfax County Courthouse on Monday.

Torres, who was fired from the department last summer, apologized to the family of John Geer during the plea hearing in Fairfax Circuit Court before Circuit Judge Robert J. Smith.

Torres was one of several officers at the scene when police were called to Geer’s Springfield home in August of 2013. Geer had been fighting with his girlfriend, and police were talking to him in the doorway of his home.

Torres said during the investigation he thought he saw Geer, 46, reach for a gun and he then fired a shot at Geer’s chest. A gun was later found nearby, but was not in Geer’s hand at the time.

“I am truly sorry for my actions. I’m heartbroken for Mr. Geer’s children,” The Washington Post reported Torres said in court. “There are no words I can say today that can adequately express my remorse.”

Prosecutors and the defense had agreed to a 12-month sentence for Torres, who has been in jail without bond, but Judge Smith declined to accept that on Monday, the Post reported. Instead, Smith asked for a standard pre-sentencing report and scheduled a sentencing hearing for June 24. By then, Torres will have served 10 months.

The plea marks a quick end to a lengthy case. The FCPD received marked criticism for not saying anything about it for over a year. The department was also part of a nearly $3 million wrongful death lawsuit filed by Geer’s family.

In the wake of the shooting, Fairfax County Supervisor Chair Sharon Bulova last year created an Ad Hoc Commission to review police policies on use of force, communications, recruiting practices, mental health and independent oversight of the department. The commission issued a detailed report last fall.

“My thoughts and prayers are with the Geer family, the friends of Mr. Geer, our community, and the men and women of the Fairfax County Police Department as the justice system concludes its course in this tragic loss of life,” FCPD Chief Edwin Roessler said in a statement following the plea.

“The men and women of the Fairfax County Police Department have fully cooperated with all authorities during this investigation,” Roessler said. “The action of one former employee is not reflective of the honorable work done day-in and day-out by all members of our department.”