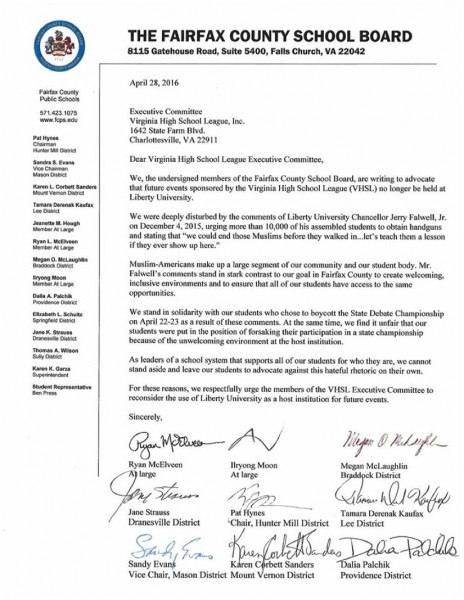 Nine members of the Fairfax County School Board are urging the Virginia High School League (VHSL) to stop holding events and competitions at Liberty University in Lynchburg.

Two weeks ago, several Fairfax County Public Schools students boycotted the VHSL Debate Championships at the Christian University. The students said they were protesting remarks by made by Liberty University president Jerry Falwell Jr. that they perceived to be anti-Muslim.

At a convocation in December, Falwell urged students to obtain concealed-carry permits and arm themselves so they could “end those Muslims.” Falwell later said he was referring only to the Islamic terrorists who killed 14 people in December in San Bernardino, Calif., not all Muslims.

“We were deeply disturbed by the comments of Liberty University Chancellor Jerry Falwell Jr. on Dec. 4, 2015 urging more than 10,000 of his assembled students to obtain handguns and stating “that we could end those Muslims before they walked in … let’s teach them a lesson if they ever show up here,” the letter reads.

“Muslim-Americans make up a large part of our community and our student body. Mr. Falwell’s comments stand in stark contrast to our goal in Fairfax County to create welcoming, inclusive environments and to ensure all of our students have access to the same opportunities.”

No word on whether the schedule will be altered or whether any more protests are planned.

END_OF_DOCUMENT_TOKEN_TO_BE_REPLACED

More Stories
Legal Insider: Why Security Clearances Get DeniedIPAR Seeking Entries for Bike Racks That Are Works of Art