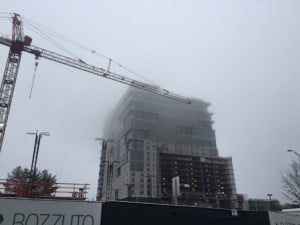 This is an op-ed by Reston Resident Terry Maynard of Reston 2020. It does not reflect the opinion of Reston Now.

In the next few months, the Fairfax County Board of Supervisors plans to approve a “one size fits all” zoning ordinance amendment that would guide redevelopment throughout the urbanizing areas of the county for decades.

It wouldn’t be too bad if the one size were a “medium” or “large,” but the board — increasingly desperate for new tax revenues from more development — has chosen to go for XXL. Specifically, the County’s draft zoning ordinance amendment proposes that all the county’s 20 transit station areas (TSAs), community redevelopment districts (CRDs), and commercial business centers (CBCs) be allowed a floor-area ratio (FAR) of up to 5.0.

So what does FAR 5.0 really mean? Literally, it means that a developer can build structures with floor space that is five times greater than the area of the parcel on which they sit. In the real world, it means that developers can build up these Fairfax County areas to a density that is greater than any that exists anywhere in northern Virginia. Even the massively developed Rosslyn Metro core only has a density of FAR 3.6 according to Arlington County (including twin towers above the Rosslyn station at FAR 10.0), about two-thirds of what Fairfax County is proposing to make available in communities and neighborhoods areas across the county.

In general, the FAR 5.0 density zoning ordinance may be appropriate for some locations, such as a part of one of Reston’s transit station areas. Reston’s new master plan calls for allowing FAR 4.0 (plus a bonus of FAR 0.5) for the small area immediately north of Reston’s Town Center Metro station. But the draft amendment makes no distinction in allowable density at the station and at the half-mile perimeter of the station area where it should taper substantially.

Moreover, Reston’s other two station areas and virtually every other Metro station area in the County, such as the West Falls Church and Van Dorn station areas, are neither planned for nor could they reasonably accommodate density anywhere approaching FAR 5.0. Unlike Reston’s Town Center (and Tysons), these places have no planned aspirations to become regional economic centers with huge population and employment increases — many tens of thousands — envisioned.

Even worse is the notion of redeveloping the County’s CBCs and CRDs at a density of up to FAR 5.0. The redevelopment of these areas is almost exclusively meant to revitalize their community economic viability, not to have broader County or regional impact. Most importantly, these areas have no walking access to Metrorail which is the key ingredient in allowing high density in TSAs. At best, they will have bus service to link them with Metro, and they certainly can’t absorb the tens of thousands of additional autos on their local streets without massive and costly improvements.

Worse yet, the residents of all these areas will probably have to pay a share of the cost for the new transportation improvements this intense development will create through new local taxes, so called “transportation tax service districts.” These needs will include a new internal “grid of streets,” improvements to existing roads, and better bus transit.

Reston is facing this situation now as the County is proposing an added local real estate tax of $.025 to $.035 per $100 valuation. One version extends the tax district to all of Reston although only about one-quarter of Reston along the Dulles Corridor is in the TSAs where the road work and development would occur. Elsewhere, in southern Fairfax County, for example, a comparable proposal could be a Richmond Highway-long tax district from Alexandria to Ft. Belvoir for roads built or improved only in the six small CRD areas designated for redevelopment along that route. There is no reason the County wouldn’t apply this warped you-pay-for-it reasoning everywhere in these redevelopment zones.

Tysons already has such a transportation tax district. The tax rate there started at $.04 per $100 valuation in 2013, but increased to $.05 per $100 valuation the following year. No doubt Tysons’ rate will continue to rise (in addition to the increased taxes from higher valuations on property there) and the proposed Reston “teaser rate” will almost certainly increase quickly soon after the Board of Supervisors approves it.

The insult to local communities is that the County’s explicit intent is to increase traffic congestion in these redeveloped areas. Yes, the County’s plan for all this transportation tax spending is to increase congestion explicitly to discourage people from driving in, out, or through these areas. The goal for these “urbanizing” areas is to increase driving delays at each intersection by up to 50 seconds from current County standards under its new “urban guidelines.” Four traffic lights will mean more than three minutes of added delay, even for people just passing through these areas, during the rush period whether on Reston Parkway or Richmond Highway.

Adding injury to insult, all these funds would be used to subsidize the profits of the local corporate developers who need the new and improved transportation capabilities to make ever larger profits on their new development. Residents would not receive one dollar in financial or any other benefit from these new taxes.

By our calculation, the developers in Reston’s TSAs will likely make more than $50 billion in profits in 2016 dollars over the 40 year plan timeframe and yet Reston residents are being asked to contribute about one-seventh of the $2.6 billion needed for roadway improvements using county costing assumptions. That translates into more than $8,800 per household over 40 years with moderate inflation. Alternatively, the developers could pay for all these roadway improvements from their $50 billion in profits and still — by our calculation — their return on investment for their $34 billion in new development would be 20 percent. We would anticipate comparable results elsewhere in the county.

The county’s response to the above analysis is that the zoning ordinance amendment proposes to limit the allowable zoning density to the level allowed in the district’s plan and “other recommendations in the adopted comprehensive plan, in furtherance of the purpose and intent of this district.”

What could be wrong with that?

First, “other recommendations” is a good sized hole through which to drive higher development density; it has been done routinely with less of a legal loophole.

Second, some of the area plans affected by this zoning proposal do not have a FAR density limit at all. They are “form based” plans that describe what the redeveloped area should look like. The only out from a FAR 5.0 zoning is the “other recommendations” phraseology, which means little constraint at all.

Third, Virginia’s “Dillon Rule” law prohibits any reduction in zoning authority once given; that density becomes a “by right” authority of the landowners. So an overly ambitious zoning decision mistake once made cannot be undone. The opportunity is all for the developers; the risk is all for the residents.

Most importantly, with the County’s new “Fairfax Forward” Comprehensive Plan amendment process–which may be better called “Fast Forward”–the barriers to increasing an area or project plan’s density are virtually non-existent. The state-mandated Comprehensive Plan, which covers all areas of the County in some depth, provides only a vision and guide to each area’s development that, unlike the zoning ordinance, is a policy document and not legally binding.

The County Board’s goal in the Fairfax Forward process is to expedite the amendment of existing local plans with high-density plan amendment proposals, which means limiting and controlling community input. There will be no more time consuming task forces, charrettes, workshops, endless public meetings, and other such community input mechanisms that the County has used previously in its Area Plan Reviews to re-vamp community-wide plans. And the approval of project-specific plan amendments will be even more tightly controlled.

Once the plan amendment has been approved, the ensuing legally binding high-density zoning approval by the same actors will soon follow. Suddenly a TSA, CBC, or CRD area or project originally planned at FAR 3.0 through the old process becomes planned at FAR 5.0 even if no mass transit is anywhere around, its related zoning amendment application approved, and construction is underway.

We strongly urge all of the county’s citizens associations, homeowners associations, neighborhood civic groups, and any local entities that might remotely be affected by this proposed zoning ordinance amendment to communicate with their supervisor their disapproval of this one-size-fits-all approach to zoning. It will only increase local congestion, environmental damage, and taxes while disrupting viable neighborhoods and communities, and provide billions in County tax welfare to already highly profitable development corporations.

And please take the time to testify at the Planning Commission and Board of Supervisors hearings on this zoning proposal, now scheduled for 8:15 p.m., May 25, and 4 p.m.  June 21, respectively at the Fairfax County government center.