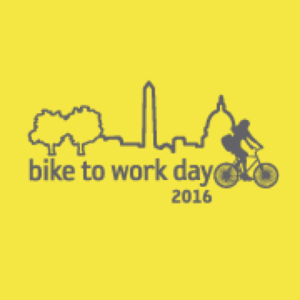 Are you riding your bicycle to work this Friday? If so, you won’t be alone.

Thousands of cyclists ( last year’s event drew 17, 500) will commute via pedal power in the annual event sponsored by Commuter Connections and the Washington Area Bicyclist Association.

Bike to work has been happening here for 15 years in an effort to make commuting healthier, cheaper and better for the environment.

“Bike to Work Day has encouraged many of the region’s commuters to make the switch to biking to work,” says Nicholas Ramfos, Director of Commuter Connections. “Since its launch in 2001, Bike to Work Day has continued to grow each year, with additional riders, pit stops, and generous sponsorships.”

Registration is free and easy to complete online at www.biketoworkmetrodc.org.

All registrants will be entered into a regional bicycle raffle, and the first 15,000 to register will receive a free t- shirt to be picked up at the pit stop location of their choice.

A total of 83 pit stops will celebrate Bike to Work Day across the region, welcoming bicyclists with refreshments, entertainment, and the chance to win prizes

Find pit stops with this online tool. Area put stops include the Herndon Town Hall Green, Reston Station at Wiehle-Reston East, the Vienna Town Green and at Tysons in front of the Capital Grille.

Bike to Work organizers said they are making a special effort to reach out to women and minorities for this year’s ride. The most recent voluntary participant survey, conducted in 2013 by the Metropolitan Washington Council of Governments (COG), revealed a gender participation gap: 34 percent of Bike to Work Day participants are women, 4 percent are African American or Asian,; and just 3 percent are Hispanic.

“I think diversity is important in everything we do,” Kelly Russell, City of Frederick Alderman and member of the National Capital Region Transportation Planning Board, said in a release. “When you put people on a bicycle it’s almost like a common language. You can teach anyone to ride a bike if they’re willing, and you can do activities together on a bicycle that bring people closer together. It’s just a really good way to build community.”

Bike to Work Day will take place rain or shine.