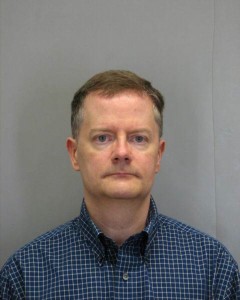 William M. “Bud” Walker, 50, was a FCPD officer for 15 years, the last six years spent as a spokesman in the police public information unit where he handled inquiries from the news media. He also was a former school resource officer at Fairfax County Public Schools’  South County High School.

In April of 2015, police received a tip from the National Center for Missing and Exploited Children (NCMEC) about suspected child pornography photos uploaded to a Tumblr account. Detectives eventually traced the account to Walker.

Assistant Fairfax commonwealth’s attorney Jessica Greis-Edwardson said at a hearing on Monday that the 10 photos that constituted the 10 counts were all of naked teenage boys, some alone and some engaged in sex acts. Walker was not accused of creating any of the images himself.

Walker was first arrested in April 2015. He was indicted on the 10 possession counts in September.

Each count carries a sentencing range of one to five years in prison. Walker’s sentencing is Aug. 12.

Walker had been free on bond, but was taken into custody following the guilty plea on Monday.