Lenz won Best Documentary chosen by the Grand Jury for his six-minute film, Papa Fred, which follows Lenz’s grandfather, Fred Gedrich, a runner who has completed hundreds of races, as he faces cancer treatment. 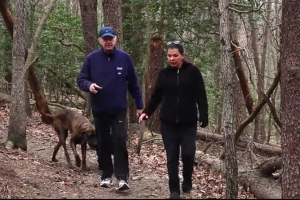 “What’s remarkable to me is he never lost his passion for running, or his spirit, despite being diagnosed with Stage IV lymphoma/leukemia just a few months earlier,” Lenz narrates in the film.

Gedrich ran everyday for 32 years. Watch the short film (above) to see what happened when cancer broke his streak.

“It was like a combination of me looking for an idea and my grandfather recently being diagnosed with leukemia,” says Lenz. “He wanted to have his story kind of told. … It was an interesting task to undertake and very challenging. I believe everything worked out as a result.”

Lenz has acted in plays at SLHS, but says his real passion is film. He has taught himself the basics of filmmaking and has been making movies since he was young, he said. He will study film at George Mason University next year.

Lenz also won the top honor in the Best Commercial-Public Service Announcement chosen by the Grand Jury for Be the Difference, about suicide prevention.