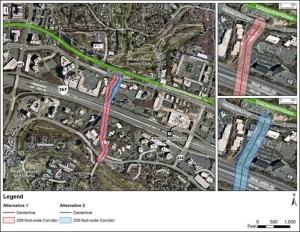 An environmental assessment for the planned Soapstone connector is proceeding as planned, but it will still be several months before Fairfax County Department of Transportation officials have any final conclusions on the project’s impact to Reston’s environment.

The Soapstone connector will be an extension of Soapstone Drive that will run from Sunrise Valley Drive to Sunset Hills Road, providing Reston with a third crossing of the Dulles Toll Road and alleviating traffic on nearby major roads.

So far, though, the project, which was approved by county supervisors in 2014, has not been found to impact historic resources or wetlands, FCDOT project manager Audra Bandy said at a community meeting on Wednesday.

Noise and air quality studies are ongoing, she said.

In the meantime, the county must work with state and federal sources to try and find funding for the project.

In 2014, the supervisors included $2.5 million for the preliminary design of this project as part of its Six Year Transportation Project Priorities. At that time, they also put the project — estimated then to cost $91.75 million — on the county’s list of high-priority projects for 2015-20.

Bandy said at a meeting in October that FCDOT should have a more specific cost estimate this fall.