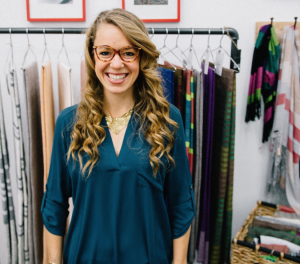 A Virginia native who founded a company that helps women artisans in developing countries will soon bring her store to Reston Town Center.

Living Threads Co. will open July 19 in the space formerly occupied by Brighton Collectibles, which closed its store at 11858 Market St. in May. The store will be a pop-up with a six-month lease, says founder Amanda Zehner.

That section of Market Street is slated for demolition and the rebuilding of an office tower, but a construction start date has not been set. The storefronts may end up housing several pop-up shops, starting with Living Threads Co.

Zehner, an Alexandria native, Virginia Tech grad and former Peace Corps volunteer in West Africa, started her company while living in Maine in 2014. The store has done online sales and operates a seasonal shop near Bar Harbor. Zehner experimented with a pop up at D.C.’s Union Market over the 2015 holiday season.

She said Reston will be a good spot to try the concept as well, even at Reston Town Center, which has an abundance of corporate retail.

“There is more a consciousness here,” said Zehner. “I think people are willing to get away from the big brands.”

Living Threads Co. sells eco-friendly housewares such as blankets and tableware; clothing such as a scarves and ponchos; and children’s toys. The goods are made by artisans in Nicaragua, India, Guatemala and Nepal.

Ten percent of company profits go to a microcredit and training program for the artisans and 30 percent goes to the weavers themselves, says Zehner.

She says the impact is noticeable in improving the lives of the artisans.

“The weavers in Nicaragua have increased their income threefold,” said Zehner. “They had an income of less than $100 month and now are making $300 a month.”

The store will host a community open house with wine and snacks on Saturday, July 23 from 3 to 6 p.m.