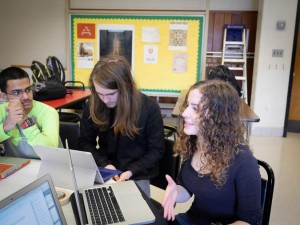 Just a year after opening in Reston, School for Tomorrow, a small independent school for grades 4 through 12 is in danger of closing.

The school, which has had its main location in Maryland since 2009, will find out next week if it has the means to go forward for 2016-17.

School parents and teachers found out in May that the school’s founder, Alan Shusterman, had badly mismanaged the school’s finances, according to a Washington Post article this week. Shusterman has since left his post, but the issues remain.

The school community is trying to raise awareness — and money — in order to go forward, said Rich Forsen of Herndon, chairman of the school’s board of directors and parent of a 10th grader.

“We are disappointed the school could be in jeopardy,” he said. He said he was drawn to the school because of it’s individualization for the students.

“In general, students are encouraged to be themselves,” he said.

Forsen said the school community has raised about $70,000, but it may not be enough to pay teachers and operate School for Tomorrow. In Reston, where there were 18 students last school year, they need about five more students or $150,000 to go forward.

Tuition is $32,500 a year, but many students had been receiving financial aid, which is also in jeopardy. There is a Go Fund Me page to try and raise scholarship money.

Forsen said many families left the school after the financial issues were disclosed last spring. He says he has been too busy trying to save the school to look at other options for his son.

The school will hold an open house Wednesday night from 6 to 8 p.m. at the school, 11480 Sunset Hills Rd. in Reston.

Jessica Wallach of Reston teaches photography as part of an interdisciplinary approach at School for Tomorrow.

“It would be such a loss to our community,” if the school closes, she said.

She said the school does a great job of meeting students’ individual needs — some come to School for Tomorrow because they are “twice exceptional” (gifted but also with learning differences) or have been bullied to public school just was not a fit for them.

“It would be such a shame if the school has to close,” she said. “We are so close to where we want to be.”