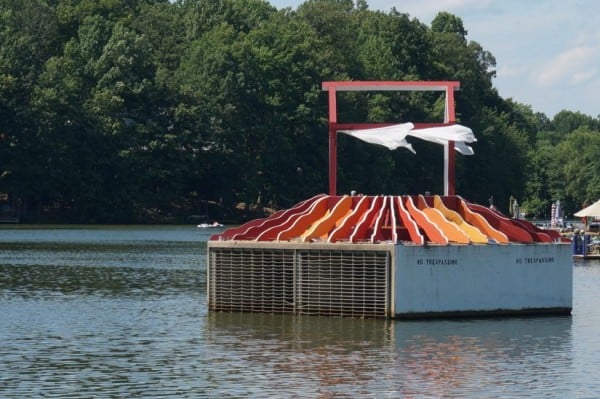 The Initiative for Public Art Reston (IPAR), scheduled to formally dedicate this year’s South Lakes High School public art work, “Simon,” has canceled tonight’s unveiling due to the extreme heat. The dedication of the work had been scheduled for 7 p.m. No word on when new ceremony will take place.

This is the third year in a row SLHS students’ — the STEAM team — have merged art and science to turn a concrete slab into a temporary work of art. The sculpture is expected to remain for several months.

The students said they wanted to honor Reston founder Robert Simon, a supporter of public art, who died last year at 101. The students’ mission statement said “Inspired by Robert E. Simon’s Seven Principles of Community, the temporary public artwork shows that beauty, both structural and natural, is a necessity of a good life and should be fostered.”

“The house structure represents how the hospitality of Reston draws people into the community, its warm colors creating an inviting atmosphere, and the curtain and window illustrating Reston’s welcoming nature. Reston is our home, and the house serves as a representation of such.”

The students worked with SLHS art teach Marco Rando on the project for a year, presenting design concepts to the Initiative for Public Art Reston (IPAR) Public Art Committee for recommendation on the design to develop for the spillway, as well as presenting and receiving approval from the Reston Association Design and Review Board (DRB).

The sculpture was first fabricated by students in the school parking lot to formalize the engineering process. It was then deconstructed and given to RA construction staff to reconstruct on the concrete spillway of Lake Thoreau.