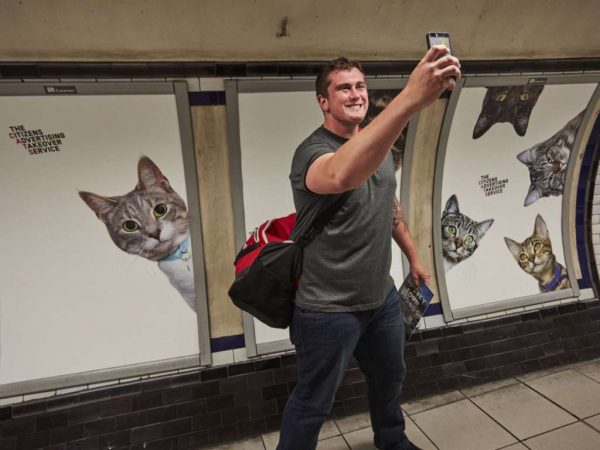 A London Underground station has been taken over by cats.

Well, pictures of cats, anyway. And among the now-famous felines is one Allie, a pet from Reston.

The photos of cats are a project of Citizens Advertising Takeover Service: C.A.T.S, which purchased up all the ad space at Clapham Common on London’s Underground. The cats will line the walls and entry gates for two weeks.

So how did Allie from Reston wind up on the wall?

Allie’s owner, Randy Cepuch, saw info about the effort organized by Glimpse, an organization that promotes social consciousness in advertising, in a previous John Kelly column. C.A.T.S. was trying to raise $33,000 to replace every ad in the station with pictures of cats.

Cepuch was among the people who donated 100 pounds (about $140 U.S.) to have a small image of his cat included on a poster. Larger posters feature cats from two rescue charities, Battersea Dogs & Cats Home and Cats Protection.

“One thing I especially like about this project is that it features a number of homeless cats — and with luck they won’t be homeless much longer,” Cepuch told the Post. “Also, as I understand it the Glimpse people hope to use this experience to open the door for unusual efforts to help remedy more serious causes. Fortunately, it’s possible to try to take on serious stuff and do something on the lighter side!”

“We tried to imagine a world where public spaces made you feel good. We hope people will enjoy being in the station and maybe think a bit differently about the world around them.

“Instead of asking you to buy something, we’re asking you to think about what’s really valuable in your life. It might not be cats, but it’s probably something you can’t find in the shops.”

A London tube rider takes a selfie with some of the cats. Among them is a feline from Reston/Credit: Catsnotads.org.