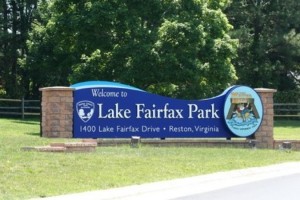 When Fairfax County voters go to the polls this fall, they will vote for, among other things, the U.S President and a county Meals Tax.

Also on the ballot is a county park bonds question. If that referendum passes, it will provide $94.7 million for the Fairfax County Park Authority.

Here’s the question posed to voters:

Shall the Board of Supervisors of Fairfax County, Virginia, contract a debt, borrow money and issue bonds, in addition to bonds previously authorized for parks and park facilities, in the maximum aggregate principal amount of $107,000,000:

(i) $94,700,000 principal amount to finance the Fairfax County
Park Authority’s cost to acquire, construct, develop and equip additional parks and park facilities, to preserve open-space land, and to develop and improve existing parks and park
facilities;

Bonds are one of the main funding mechanisms for the park authority. Park fees cover about 60 percent of all park operating costs. The remaining operating funds are derived from taxpayer contributions, including developer proffers. 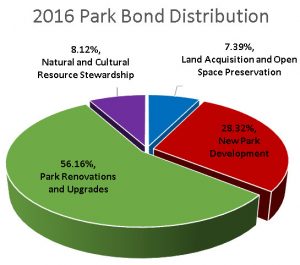 But user fees do not pay for developing new facilities — such as a $90 million recreation center planned for the Reston Town Center North area — or major renovations.

The sale of bonds helps Fairfax County spread the cost over the years that the facilities are used. Fairfax County has a AAA Bond rating, which ensures low interest on the loans.

If passed, this will be the third bond program of the last 10 years for the park authority. The last bond referendum was in 2012; the park authority says it is still in the process of allocating that $63 million. Of that $63M, the park authority has sold $14.8M, leaving a current balance of $48.2M in bonds authorized, but unissued.

With a bond sale coming up in January, the park authority anticipates that an additional $15M will be sold, reducing the available balance to $33.2M.

The park authority says the 2016 bond would be allocated this way: 56 percent for park renovations and upgrades; 28 percent for new park development; 8 percent for natural and cultural resources stewardship; and 7 percent for land acquisition and open space preservation.

See more about the bonds and some of the improvements planned by the park authority on the Fairfax County Park Authority website.