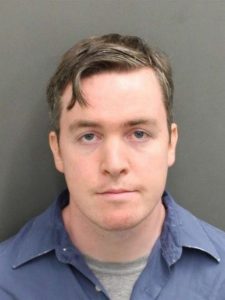 Michael Richard Carr, 30, of Herndon, had been working in the station’s communications center since 2009. He abruptly resigned his job and went missing on Sept. 26; police discovered the alleged taping during the missing persons investigation, a police spokeswoman said.

“The preliminary investigation indicates that the video recordings were captured between November of 2011 and March of 2012,” police spokeswoman Jane Ross said in a release. “Carr was working as Communications Technician II, non-supervisory civilian position within the department.”

Carr was located in Orlando, Fla., on Oct. 1. He was charged by the Florida Highway Patrol with five five counts of videotaping a non-consenting person in a location where there is an expectation of privacy.

He is currently being held in Orange County Adult Detention Center, Orange County, Fla. awaiting an extradition hearing to be returned to Virginia.

Ross said the initial investigation indicates the video recordings are limited to two victims; however, the investigation is ongoing. Both victims have been notified.

“The department has taken all necessary actions to ensure the Herndon Police Department facility where this occurred is free of any type of unauthorized recording devices,” she said.