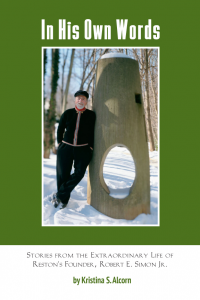 In His Own Words: Stories from the Extraordinary Life of Reston’s Founder, the biography published earlier this year by Restonian Kristina Alcorn, is now available for download on Amazon.

Alcorn spent about two years interviewing Simon, who died in September 2015 at age 101. The self-published book was made available locally and on Amazon in March.

The book is a compilation of Bob’s life stories that “draw an intimate and entertaining portrait of the man many knew only from a distance,” Alcorn says.

The book highlights Simon’s humor, adventurous spirit, and dogged determination, Alcorn said. It is illustrated with over 100 photographs and artifacts from his private collection, the archives of Carnegie Hall, and the Reston Historic Trust.

“As a kid growing up in Reston in the 70s, Bob was an icon,” Alcorn says. “Decades later, when I encountered Bob at local events I would hear bits and pieces of his stories. He was a real life version of the ‘World’s Most Fascinating Man.’ I wanted to hear more and as I did, I knew these tales were too good to only be heard by the lucky few around him. I asked if I could record his stories, and he said ‘yes,’ ”

The download is available for $9.99. See more information on Amazon.