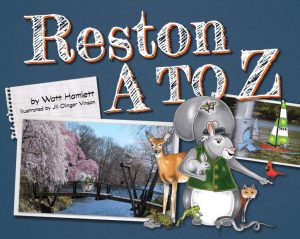 Two longtime Reston residents have released a new book aimed at teaching local kids all about the area.

The book takes young readers on a tour of the community and teaches them the story of how it came to be, led by none other than its famous founder — who takes the form of an animal named Robert E. Squirrel.

The story is told in rhyming verse, and takes children through the alphabet from A to Z, with each stop featuring a different corner of the Reston community. The book includes colorful, illustrated drawings of the places, activities and nature that make Reston what it is.

They add, the book also features other creative touches like a hidden acorn on each page, a coloring page, and a travel log where kids can check off the places or things in the book they have experienced around Reston.

All in all, the book is an homage to the town Hamlett and Vinson have grown to love as residents for so many years.

Hamlett, the book’s author and photographer, has lived in Reston since 2000.  He says he was inspired to write this book out of his love for Reston that grew from exploring it over many years with his wife and two sons. 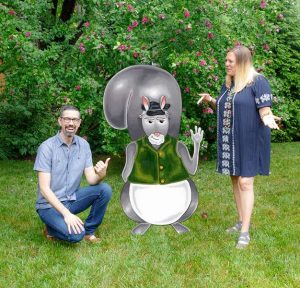 “I hope the book serves as a tribute to Reston’s beauty, community spirit and the vision of Reston’s founder, Robert E. Simon,” Hamlett said.

Jill Olinger Vinson, the book’s illustrator, grew up in Reston and is a graduate of South Lakes High School. She returned as an adult to live in Reston with her husband, and her two sons were born in Reston. She now lives in neighboring Herndon.

“Reston A to Z is available for sale locally at several locations, including the Reston Museum at Lake Anne Plaza. For all copies purchased at the Museum, 100 percent of the profits will go directly to the Reston Historic Trust. The Museum is also selling stuffed Bob Squirrel plushes.

Hamlett and Vinson will be signing copies of the book at the Reston Museum on Saturday, Dec. 3 from 10 a.m. to noon.

The book is also available for purchase online from Mascot Books, and at other Reston retailers including Scrawl Books and Dawn Price Baby, as well as online from Amazon, Barnes & Noble and Books-A-Million. The book retails for $15.95.