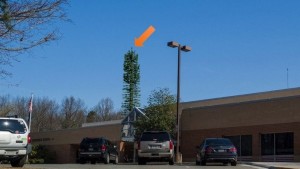 The Hunter Mill District Land Use Committee voted 3-2 on Nov. 15 to turn down an application by Milestone Communication and Verizon Wireless to construct the tower 150 feet away from a playground on the school’s property at 2791 Fox Mill Road.

The new tower is necessary to fill in gaps in cell coverage in the areas off Lawyers Road, including Fox Mill Woods, according to Milestone.

“Sometimes the first place we select is not the best location,” Milestone President Len Forkas Jr. told Fairfax Connection. “Our goal is to always find a solution.”

Community activists, who run the website StopTheCrossfieldTower.org, attended community meetings earlier this month to point out what members of the group called “discrepancies” in the companies’ application. The activists have claimed that the tower’s proposed site was actually about 60 feet from the playground, not 150 feet as the application indicated.

The locals said the closeness of the proposed tower to the playground left them with many concerns. At Crossfield, the tower would look like an evergreen tree and carry signals from five mobile carriers. It would sit within a 2,500-square-foot area surrounded by an 8-foot fence.

“There is no definitive science proving the radiation emitted from these towers is safe. We’re not willing to risk our children’s health for $189 a month from a cell-tower owner,” they say on their website, referring to the rent Fairfax County Public Schools would reportedly receive from Milestone in exchange for placing the tower on school property.

A YouTube video by “Concerned Parent” shows Crossfield students holding cards saying they do not want to be part of a living study on the effects of long-term exposure to radiation from cell towers.