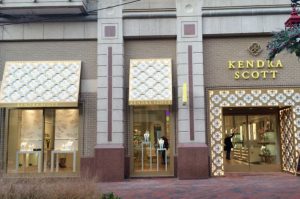 A Reston Town Center jewelry store is set to donate 20 percent of its proceeds during a special sale next week to help combat human trafficking in Northern Virginia, with the help of Mrs. DC America.

The Kendra Scott at 11924 Market St. is scheduled to have a “Kendra Gives Back Party” with Mrs. DC America 2015 Elaine Espinola Keltz this coming Tuesday from 6-8 p.m. The shop will donate 20 percent of its sales to the Northern Virginia Human Trafficking Initiative, a local nonprofit organization that helps victims of human trafficking get back on their feet.

NOVA-HTI was formed after Congressman Frank Wolf (R-Va.) from the neighboring 10th District asked faith-based organizations to get more involved in the fight against human trafficking in Northern Virginia in 2010. A local consortium of pastors then established NOVA-HTI.

The organization works to create awareness of human trafficking, and helps connect victims with support services within the area.

Virginia is among the top 10 U.S. states with the most cases of human trafficking, according to NOVA-HTI’s website. In particular, teen sex trafficking is one of the most common types of victimization that takes place in the area.