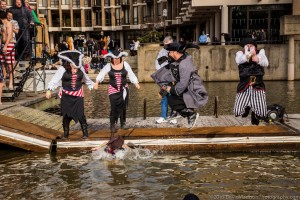 eston residents can don costumes and get “ice, ice, crazy” during an annual charity event next month.

This year’s Virginia Polar Dip is slated to take place at the Reston Community Center at Lake Anne on Feb. 11. The benefit helps raise money to send children with life-threatening illnesses and their families to Camp Sunshine in Maine.

This year’s goal is to raise $100,000, which would be enough to send about 40 area families to the camp, organizers said. The Reston event is held in conjunction with other Polar Dip plunges across the U.S.

In previous years, participants have worn wetsuits, superhero getups and pirate costumes as they leapt in the lake. But they don’t need to fully submerge themselves: attendees can also participate by just dunking their toes in the water during the so-called “Chicken Dip.” Participants who raise $100 or more for the cause will receive a commemorative T-shirt.

Registration on the day of the event is scheduled to begin at noon. The event itself will begin about two hours later.

More Stories
Reston Community Players to Stage ‘Vanya and Sonia and Masha and Spike’Legal Insider: Is the Right to Disconnect in France a Trend?