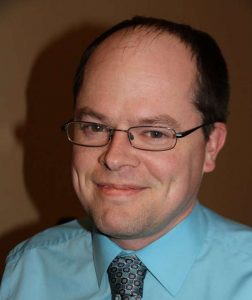 Emke comes to Reston Now from his previous position as editor of The Journal, a print newspaper in Martinsburg, West Virginia. He is a native of Chautauqua County, New York.

Emke’s move to Reston Now means some big changes for him — both in the busy hustle and bustle of the D.C. Metro area, and with the switch from print to hyperlocal digital news.

That’s all part of what intrigues Emke about his new position, though.

“I’m really excited about the change of scenery,” he said.

Since starting with Reston Now on Jan. 2, Emke has been diving right in, getting familiar with the issues that matter most to Restonians, and talking with many local movers and shakers.

Emke said what he has found is a place where technology, development and big business meet, but that still feels similar to the smaller town he comes from — because the people of Reston care deeply about their community. In just his first few days, he has tackled issues that people in Reston really care about, such as new parking fees at Reston Town Center and residents’ relationship with Reston Association.

“It’s a big community and everybody pays into it, so everyone has a hand in what goes on, and has opinions about how their money is spent,” Emke said. “I’m very interested in learning more about the relationship between Reston Association and its members.”

As for Reston Town Center, Emke said he has spent a lot of time in the past shopping and dining in the area, so he can understand how the new parking fees might affect locals.

All in all, Emke said he’s excited to be in Reston, and has enjoyed the people he has met and talked with so far as he gets acclimated to his new role.

“Everyone I’ve talked to so far has been very helpful and welcoming as I move into this new position,” he said. “I look forward to meeting many more people in the days and weeks to come.”

Emke added that he hopes people will feel comfortable getting to know him and sharing the local issues that are important to them.

“I want to tell as many stories as possible that are important to residents,” he said. “I hope the people of Reston feel comfortable helping me to do that.”

Dave Emke can be reached at [email protected] or on Twitter, @emkedave.