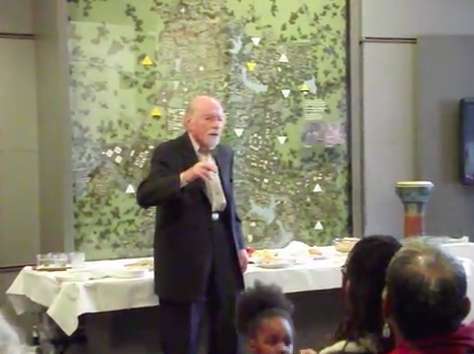 Robert E. Simon founded Reston in 1964 on the principle that it would be inclusive for all. Six years ago this month, during a Black History Month event at the Reston Historic Trust and Museum, a 96-year-old Simon shared some of his thoughts about racial inclusion.

His words, which are available on YouTube, are transcribed below:

“The story is something I read in the New Yorker magazine. In those days, if you wanted to go from one coast to the other, you had to change trains in Chicago. After Chicago, there were no more cars where you could get food. You got off the train and went into Harvey Houses.”

“And so when I got started here, it was inconceivable that we would not be an open community. [unintelligible] It wasn’t that great an idea to some fellow Virginians at the time. The brokers outside of Reston were prone to say ‘That’s communist.'”

“At any rate, the rest of the history is pretty heart-warming. You have, I think I heard someplace, 100 different languages. I don’t know if that’s possible. But we do have enormous diversity here.”

“At the moment, if you want to pick on ethnic origin, it’s not so much Black. At the moment it’s Latino, which is very interesting, what’s going on in the world, if you think about it — how hate can be transferred.”