Aniq Bhatti, one of Nabra Hassanen’s classmates at South Lakes High School, said the girl had no enemies.

“No enemies at all,” Bhatti reiterated. “She would never want to or have to. That’s the way she is.”

Bhatti was one of many friends and neighbors who came to Nabra’s home Monday afternoon as a tight-knit community mourned the untimely loss of the beloved young girl. They gathered around Nabra’s mother, Sawsan Gazzar, in her stairwell to provide their condolences and share in her grief.

Nabra was killed early Sunday morning after being attacked and separated from her friends while walking on Dranesville Road near the All Dulles Area Muslim Society, police say.

The line of mourners stretched down the stairs and, at times, far down the sidewalk of the apartment complex on Becontree Lane. Tears abounded as dozens of Nabra’s friends from SLHS joined the line, fresh off an emotional day at the school.

“No one hated her. No one ever talked bad about her,” said Yanis Gribi, one of those friends. “She didn’t deserve to die like that.”

Police say a man attacked Nabra as she was walking back from breakfast with her friends following an overnight activity at the ADAMS Center. A body, presumably Nadra’s, was recovered later Sunday in a pond in Sterling.

A suspect in the case, 22-year-old Darwin Martinez Torres of Sterling, was arrested Sunday and faces a murder charge. He is being held without bond.

Fairfax County Police said Monday morning that the case is not being investigated as a hate crime, but rather as a case of road rage. However, county prosecutor Ray Morrogh said later in the day that he would wait until more information is collected before deciding how to proceed. 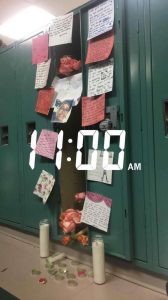 “For what happened, and how she is, I don’t think she deserved to die like that,” Gribi said. “And to be thrown in a lake, like she was trash, like she was nothing.”

Her friends decorated her locker at South Lakes with pictures, flowers and notes. Nabra was finishing her sophomore year.

“She was everyone’s friend — everyone,” said Liban Issak. “She loved everybody and everything. She brought everyone together.”

A vigil to celebrate Nabra’s life is scheduled for 6:30 p.m. Wednesday at Lake Anne Plaza.

More Stories
Severe Thunderstorm Warning in Effect for Reston Until 4 P.M.Thousands Without Power in Area After Storm Rolls Through