Search
News
The anoa are so rare that there are only 70 in the country
Goats await food at the petting area
A duck family swims around the pond, where guests can walk around
Previous Image 1/3 Next Image

One of the rarest forms of water buffalo in the world can be found right here in Reston at Roer’s Zoofari.

The zoo (1228 Hunter Mill Road) recently acquired a pair of lowland anoa, endangered dwarf water buffalo from Indonesia that are so rare there are only about 70 in the United States.

“We work with several breeding programs to ensure that the Zoofari has adequate environments for these threatened, endangered or even vulnerable animals,” said Vanessa Stoffel, one of the zoo’s owners. 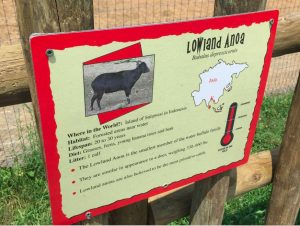 Anoa are characterized by their small, stocky bodies covered with thick, dark hair. They almost look like a brown cattle crossed with a woodland deer. They eat aquatic plants, ferns and grasses. Similarly to other water buffalo, they like to bathe in pools of water and mud.

While the species is technically protected under Indonesian law, its endangered status comes from hunting and habitat loss. In the past, their skulls and horns have been harvested by these hunters and sold for use in traditional medicine.

Visitors to the former Reston Zoo can enjoy the rare animals in a new barnyard area that has lots of fresh air for the animals. Another new addition is the use of buses to transport guests around the zoo, instead of the tractors that were formerly used.

“It was getting difficult to find someone who could control a tractor in Reston,” Stoffel said.

The buses are easier to maintain, she said, and visitors can still experience alpacas and other animals walking up to the buses as they go on the Zoofari. 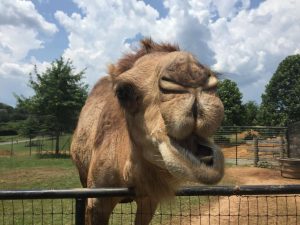 The zoo also features an interactive exhibit with a camel and giraffe. At certain times, visitors can pay $5 to feel the animals. Patrons are able to go up close and personal with the animals during these encounters.

“If you hold your palm flat [to the camel], he’ll even give you kisses,” said zookeeper Alisha Benack as she monitored the camel encounter. On cue, the camel kissed and nuzzled her just as friendly as a dog would.

Roer’s Zoofari is open daily from 9 a.m. to 6 p.m., with times for special exhibits and encounters available daily. Visit its website for ticket information or call 703-757-6222.