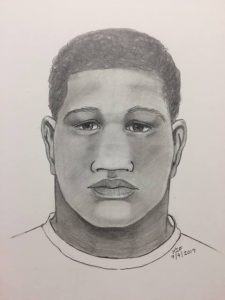 A 15-year-old boy from Herndon faces a number of charges after police say a juvenile girl was assaulted in her Sterling home.

According to the Loudoun County Sheriff’s Office, the incident took place at about 9 p.m. Friday in the 1300 block of E. Lee Road. The victim says the teen opened the window of the home’s kitchen, where the girl was, and “leaned in halfway” before he “moved further through the window.”

The teen allegedly “inappropriately touched the [girl] and threw items at her” before fleeing the scene. The girl was not injured in the incident.

The victim told police she “previously had seen the suspect in the Sterling area a few days prior to the incident.” On Saturday, LCSO released a suspect sketch and description, calling him “a black male with a heavier build, in his late teens to early twenties.”

At about noon Wednesday, LCSO reported the teen — whose name is not being released due to his age — had been arrested and charged with felony burglary, misdemeanor sexual assault and misdemeanor simple assault. He is being held at the Loudoun County Juvenile Detention Center.