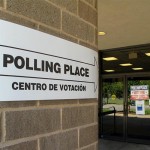 Virginia is one of only two states in the U.S. with statewide elections in November this year.

Here’s a list of what Restonians can expect to see on their ballot this Tuesday, Nov. 7, as well as information on where to find your polling place.

What’s On The Ballot?

Governor of Virginia: Virginia is a one-term-only state when it comes to its governors. Therefore, Gov. Terry McAuliffe is on his way out, and a number of candidates are vying for your vote to take his place. According to the Washington Post, as of Monday, Nov. 6, the race is neck-in-neck.

The candidates, in alphabetical order, are:

Libertarian Cliff Hyra – A 34-year-old patent attorney from Richmond, Virginia. This is his first bid for a public office.

Republican Ed Gillespie – A 56-year-old former strategist for House Republicans, former chair of the Republican National Committee, and White House advisor to the George W. Bush administration. Has worked as a lobbyist and political consultant, and ran against Virginia Senator Mark Warner in 2014.

Democrat Ralph Northam – At 56 years old, Northam is the current lieutenant governor to Gov. McAuliffe. Served as an Army doctor for American troops during Operation Desert Storm, and came home to start his own medical practice as a pediatric neurologist after.

Lieutenant Governor – Two candidates are running to replace Ralph Northam as Virgnia’s lieutenant governor, a role which often presides over the State Senate, and has the power to break tie votes.

The candidates, in alphabetical order, are:

Justin Fairfax – A federal prosecutor from Annandale in Fairfax County, who has worked on many drug and violent crime cases. He ran for state attorney general in 2013, and ran Senator Mark Warner’s re-election campaign in 2014. He has worked in Virginia’s legislative, executive, and judicial branches of government.

Republican John Adams – John Adams served as an officer in the U.S. Navy, having graduated from the Virginia Military Institute. He also earned a law degree from University of Virginia, and has made a career as an attorney at a Richmond law firm.

Democrat Mark Herring (Incumbent) – Herring has served as the state attorney general under Gov. McAuliffe since 2014. Prior to that, he served as a state senator representing Fairfax and Loudoun counties, served on the Loudoun County Board of Supervisors, and ran his own small private law practice in Loudoun County for 20 years. As attorney general, Herring has made a name for himself opposing Virginia’s ban on same-sex marriage and challenging President Donald Trump’s first immigration ban.

The Board of Supervisors has asked residents to approve the sale of $315 million in bonds. If approved, the county has published a list of school improvement projects they would use the money to pay for. Highlights include:

How do I find my polling place?

If you’re not sure where your assigned polling place is, you can enter your address into the Virginia Department of Elections website.

Residents should note that there are a total of 243 polling places throughout the state, and several of them have been changed since the last election, so you may not be voting in the same place you did last time.

The polls will be open this Tuesday, Nov. 7 from 6 a.m. to 7 p.m. Virginia voters should remember to bring their photo identification with them.