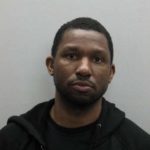 An officer attempted to stop Cox’s vehicle for driving in a reckless manner around 9:45 p.m., according to police. When the driver did not stop, police pursued the car.

Several miles later, the driver stopped and police arrested and charged him with driving while intoxicated, driving on a revoked license, misdemeanor speed to elude and reckless driving, police said.

The incident took place near the Fairfax County Parkway and Stringfellow Court.