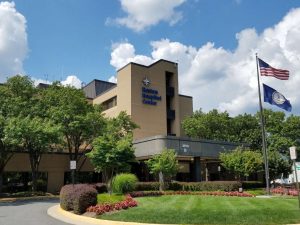 Reston Hospital Center has filed plans to build a two-story emergency department in Tysons, according to the Washington Business Journal.

The hospital, which is owned by HCA Holdings, Inc. would build an emergency center on 2000 Old Gallows Road in Vienna, land that is currently zoned for commercial uses. The proposal for the $1.1 million project includes 11 patient rooms for emergency care. RHC is seeking to have the property rezoned from commercial use. The project has already received state regulatory approval.

According to the Washington Business Journal, the move could deepen a battle between HCA and Inova over the market in northern Virginia:

HCA officials said the 24-hour emergency department would offer hospital-level emergency care in an accessible location, not to mention one with rapid population growth. They pointed to growth projections showing that Tysons will have more than 100,000 residents and 200,000 jobs by 2050, adding that a new freestanding emergency department there “will reduce the time county emergency services need to spend transporting patients while decompressing local hospital emergency rooms.”