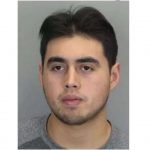 A Herndon man pleaded guilty this week to attempted capital murder, among other charges, in connection with an incident in January where a police officer was shot at during a traffic stop in the Great Falls Area.

In a release, the Fairfax County Police Department said Brian Neftali Landaverde,  21,  shot at the police officer on Jan. 22. The officer was not injured during the shooting and Landaverde sped away from the scene, police said. He was arrested the next day when he was found by Herndon Police Department on unrelated charges.

Landaverde will receive his sentence on March 9. He pleaded guilty to attempted capital murder, use of a firearm in the commission of a felony and speed to elude.

According to police, three people, including two juveniles, were in Landaverde’s car prior to the shooting on Rossmore Court.