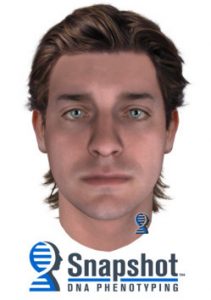 The case of Roberta Walls, a 22-year-old library worker who was stabbed, raped and dumped in a baseball field in Virginia Beach, went cold in 1988. Local police collected DNA from 41 people with ties to Walls. But no one checked out.

More than 30 years later, the work of Parabon NanoLabs, a Reston-based company, is helping breath new life into the case.

The company uses DNA phenotyping to predict physical traits and ancestry from genetic material left at crime scenes. Genetic sleuths can track eye color, skin color, face shape and heritage, but not other traits like age, weight and hairstyle.

It’s a new way to look at DNA, which law enforcement agencies use by matching a suspect’s DNA to that found at a crime scene or cross-checking against government databases.

But at Parabon, staff see DNA as a blueprint, not a fingerprint, said Ellen Greytak, Parabon’s bioinformatics director. Forensic artists can use information from DNA phenotyping to develop a composite image, which investigators use to narrow suspect lists, sans witness descriptions. The method can also help further investigations about unidentified remains.

But the method has raised some concerns, including questions about accuracy, racial profiling and privacy infringement. The American Civil Liberties Union, for example, calls composites “science fiction.” The organization says DNA phenotyping should not advertise suspects to the public until the science is firmly proven and established.

“The actual suspect may look nothing look the speculative image, which could end up detouring or otherwise harming an investigation,” Jay Stanley, a senior policy analyst, wrote.

Greytak said the company is simply providing the same service a witness would have provided from an “objective” perspective. Law enforcement officials are becoming more open to the technology after Parabon analyzes DNA samples provided by police. 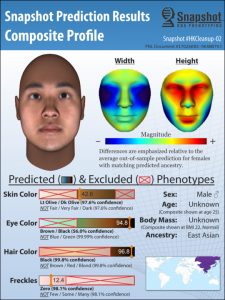 Although the company has limited control over how law enforcement agencies use the information, Greytak said most  agencies understand the technology is not a panacea. The company cautions against running facial composites in facial recognition software.

“We always emphasize the composite is not a photograph of the person. We only have access to the DNA. It’s important to remember that two people with similar DNA could have a different appearance,” she said. “It’s not going to immediately solve every case but it’s always going to give you more information than what you have before.”

In the future, the company hopes to expand the number of predictable traits – especially age – and build up its database, which is used to build predict models. Currently, the database has information about DNA and physical appearance from volunteers.

Until then, Greytak said she finds the work especially worthwhile. Recently, the company began receiving handwritten thank you notes from loved ones whose cases Parabon is considering. For many, newfound hope in abandoned cases is uplifting, she said.