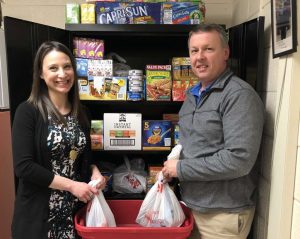 Elementary schools in Reston often give students in need food for the weekend.

But that resource largely ends in middle school, adding to challenge of adjusting to the unfamiliar and sometimes daunting environment of middle school.

When school counselors at Langston Hughes Middle School realized this was the case, they partnered with two non-profit organizations to create a food pantry for students who need meals over the weekend. Since the program launched this year, 20 students have signed on.

The list is growing. Roughly 35 percent of all students receive free or reduced meals at the school, down from nearly 40 percent in the 2014-2015 academic year, according to county data.

“This is run by the community. We want to support all the kids in our building over the weekend so they can be ready for school,” said Marissa Brooks, a counselor at the school.

To jumpstart the program, the school received a grant from Britepaths, a nonprofit organization that offers healthy meals, drinks and snacks over the weekend. Another nonprofit, Blessings in a Backpack, has also committed to providing bagged items through the end of the academic year.

The school has an Amazon wishlist and accepts donations from 7 a.m. to 3 p.m. on weekdays.  Accepted donations include dried fruit, snack packs, pasta, sauce and breakfast bars.