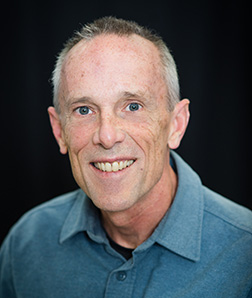 Voting in the 2018 Reston Association Board of Directors election will run from March 5 through April 2. This week, we will continue posting profiles on each of the candidates.

Featured here is David Ballard, who is facing three other candidates for the at-large seat for a one-year term. The profiles are in a Q-and-A format. With the exception of minor formatting edits, profiles are published in unedited form. Each candidate had an opportunity to answer the same questions in their own words.

My family has lived in Reston since 2001, though we were overseas on diplomatic assignment from 2004-2010.

I am originally from Texas, but went to college in Washington and lived off and on in the DC area the various times I was assigned to Washington as a Foreign Service Officer.

In 2000, my mother moved to Reston from Texas because three of her four kids were living (or based, in our case) in the DC area. She lived in North Point and worked as a teacher at Lake Anne Elementary School. We stayed with her on a visit in 2000 and fell in love with Reston, which I don’t think I’d ever even visited before. When I was assigned to Washington in 2001, we didn’t even look anywhere else and bought a home in the Hunt Club cluster. During those years, our two sons started at Lake Anne and our daughter was born at Reston Hospital Center.

By the time we returned from overseas for another Washington assignment in early 2011, we had three school-aged kids and ended up in a different house–the one we still live in. At that time, we had a child at South Lakes, another at Langston Hughes, and a third at Lake Anne. Since then, two have graduated from South Lakes and the third is currently a student there.

You’ll be pleased to hear that one of the main reasons I was inspired to run for the Board is, in fact, Reston Now. I had not paid any attention to the website until 2015, when someone told me he’d read an article about my son’s SLHS track team on the site. So I signed up for the daily email from Reston Now and began to pay a lot more attention to our community’s issues. That, in turn, led to the notion that I had a voice and, perhaps, a role to play in those issues.

I retired from the Foreign Service in 2015 and have had a much more flexible schedule since then. While I still work part-time, including as an FCPS substitute teacher, I missed the “service” part of my former career, and- to be honest–after decades of supervisory responsibility in my assignments, missed having a leadership role in something I care about. (In this vein, Lord knows my family is tired of my presuming to assume a leadership role at home…) Most important, however, is that I truly enjoy being a part of a team that is working to fix, solve, or improve something, so when I read the call for candidates–on Reston Now, of course–I thought I might be useful to my community’s leadership.

Like every other candidate, I am concerned about the potential–although I would say “inevitable,” not just “potential”–negative effects of increased population density, and want to avoid or mitigate them. Our back yard is on Wiehle Avenue, for example, so we now live next to two traffic jams per day during morning and evening rush hours. It had never crossed my mind that Reston might suffer such a thing as a rush hour until that happened. Maybe, with better planning, we can spare some of our residents that fate in the future.

Another concern I have is budget-driven cuts to quality of life components of the Reston experience. I was as annoyed as anyone when pool hours were shortened, for example, even though I admittedly didn’t know enough about the cost-to-usage ratio to have clear grounds to object. Still, that was emblematic of the kind of thing that I hate to see happen in Reston, whatever the reason might be.

The third concern I have is more abstract. It is preparing Reston’s future in the county and the entire DC area. We’ve seen the impact of the Silver Line, so what is the future impact of even more Silver Line? If Amazon chooses Northern Virginia for its second headquarters, what will that mean for Reston? In other words, we have to be ready to contend with probable changes to the overall Northern Virginia environment in order to protect and promote Reston’s special–and I believe it is special–status in that region.

I’d like to think I’d be a hardworking, thoughtful team member who accurately and honestly represents the concerns of the people of Reston. What is probably most important to me, however, is that I would hope to reflect the aspirations of our community as we move forward. I don’t think the RA Board’s role is just to protect a way of life or to hold back the forces of change. We should also be a channel for projecting and promoting whatever constitutes positive evolution for the Reston way. Reston is not what it was when it was founded, but that doesn’t mean we throw up our hands or mourn our loss when we can choose to identify and work toward an even better Reston.

Maybe the best way to answer this is to copy and paste–unedited– the opening summary of the resumé I use in my rather desultory “second career” job search. Your readers–and, ultimately, Reston voters– can decide if these qualifications and experience are compatible with service on the RA Board.