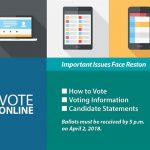 Renters of privately owned houses, townhouses and condominiums did not receive ballots will receive ballots by the early next week. Apartments renters were not impacted by muddle. All other ballots were mailed on Monday, March 5.

The delay in mailing ballots will not impact the deadline for voting, which ends on April 2 at 5 p.m. Members can also vote online.

RA first became aware of the issue yesterday after receiving inquiries from members who did not receive ballots, according to Mike Leone, RA’s director of communications and community engagement.

“After doing some internal research we learned the common thread was that these members were renters living in non-apartments. In the complex process of compiling the data file of RA voting members, a portion of the database related to renters was improperly coded, leading to these members not receiving their ballots,” Leone wrote in a statement to Reston Now.

In a statement, Intelliscan Inc., RA’s independent election contractor, and RA’s Elections Committee, said the delay “will not impact the accuracy or integrity of the voting results.”

Results of the election will be announced on April 10. Thirteen candidates are vying for four open seats on RA’s Board of Directors.

“We apologize for the mistake and are confident the remaining ballots will be mailed early next week,” Leone added.