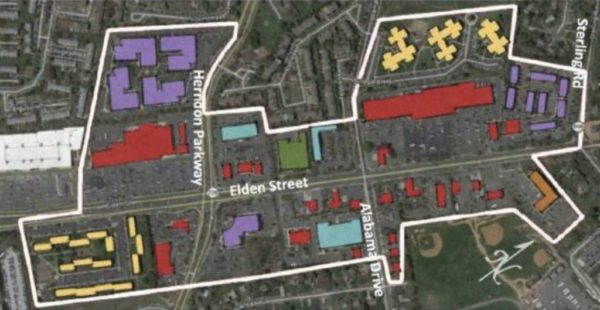 Town of Herndon officials are seeking the public feedback as the town works to revitalize the South Elden Street area, a corridor that runs along Elden Street from Worldgate Drive to Sterling Road.

Officials plan to present what they described as a “moderate scale” redevelopment plan for the area at a meeting today (June 26) at 7 p.m. in the Town of Herndon Council Chambers (765 Lynn Street).

Ideas on how to revitalize the corridor are requested, including whether or not older properties in the area should be redeveloped and the desired mix of retail, residential, office and other uses.

Last year, the town jumpstarted an initiative to create a plan for the commercial corridor between Herndon Parkway and Sterling Road. In 2015, an amendment to the town’s comprehensive plan called for making improvements to South Elden Street. Possible changes include creating a shared use path for bicycles and pedestrians, dedicated turn lanes, a raised median, updated pedestrian signals and the placement of overhead wires underground.

If funding sources are received, the town could begin designing the project in 2024. A conceptual plan of improvements and the preliminary application for improvements has not been made public yet.

A public hearing is set before the Planning Commission on July 2 and August 6.