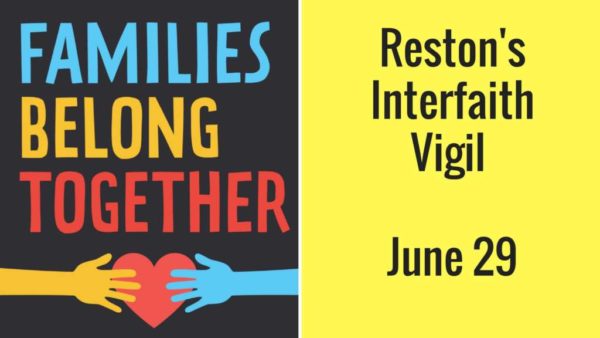 The United Christian Parish (11508 North Shore Drive) will host an interfaith vigil in support of the national “Families Belong Together” campaign tomorrow.

A rally is scheduled for Saturday in the District in order demand the reunification of families and the end of family separation in detention.

In Reston, organizers hope Friday’s event will “shine a light of truth and hope.” The event is open to all and is organized by United Christian Parish Reston, Unitarian Universalist Reston, Washington Plaza Baptist, Shoreshim, Unity Fairfax, ADAMS Center, MCC NOVA, and others.

“The vigil is very important as we join together to light candles of hope and resistant to unjust and inhumane policies that separate families [and] put children, immigrants, and asylum seekers into cages,” said James Dean, co-chair of UCP’s justice and peace ministry team.

“Some of us can’t march, but we can gather together as part of this interfaith vigil,” Dean said.

Organizers of the national campaign issued the following description of the event:

The Trump Administration is a threat to the lives and safety of millions of immigrant children. Trump’s Immigration and Customs Enforcement (ICE) and Customs and Border Protection (CBP) agents have torn babies from their mothers, run over, punched, and sexually abused children and Health and Human Services have lost track of thousands of children and youth in their custody. They are unfit to be in charge of children.

We demand that Trump’s immigration agencies stop the implementation of any policy that separates children and youth from their families and that the Administration enlist qualified social service agencies to ensure the well-being of children who are still in their custody or have gone missing.