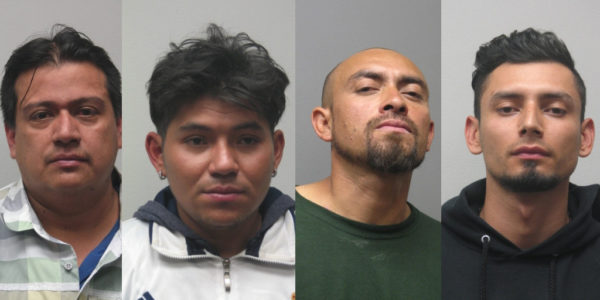 Four men were arrested after a high-speed police pursuit Wednesday night near the intersection of Sunrise Valley Drive and Fairfax County Parkway.

A police officer attempted to stop a car stopped on the 2000 block of Cocquina Drive when he noticed a traffic violation, according to the Fairfax County Police Department. The driver, Douglas Arriola Acosta, 38, of Centreville, sped off in the car.

He was arrested after a police pursuit a short while later. The passengers, Ronald Medina Aguilar, 38, of Herndon, Jose Timeuz, 25, of Reston, and William Guillen Melendez, 29, of Reston, were charged with being drunk in public.

Acosta was treated at Reston Hospital Center for a K-9 bite and charged with speed to elude, driving while intoxicated, and driving on a revoked license.