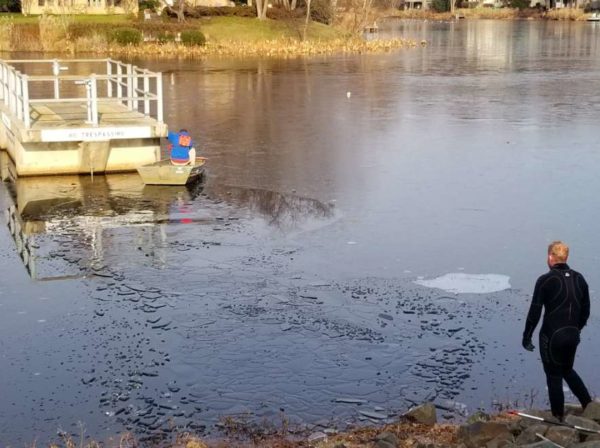 If Reston’s lakes have seemed a little low to you lately, don’t worry, you’re not crazy.

The Reston Association is running its annual dive inspections on all the dam spillways across each of the local lakes. The water level of the lake has been lowered by two inches today and yesterday to accommodate the inspections.

According to Nicki Bellezza, watershed manager for the Reston Association, the association contracts with firms to provide dive inspections every year to examine the concrete risers and spillways to make sure everything is functioning properly.

“During one inspection we noticed a small leak that we were able to repair at Lake Thoreau last year,” said Bellezza.

Restons lakes are not natural, but are artificial reservoirs built in the latter half of the 20th century to support the increased water runoff from new developments.

“The lake spillways allow water to tumble over into a large pipe, similar to a bathtub drain,” said Bellezza. “The structures also have gates that, when opened, allow us to lower the water level in the lake. We do not normally operate the gates unless we need to do inspections or for routine maintenance.”

The main challenge facing the lakes today, according to Bellezza, is corrosion of the spillways due to the age of the infrastructure. Bellezza said the Reston Association will review the results of the dive inspections and make decisions moving forward about future improvements to the lake infrastructure.