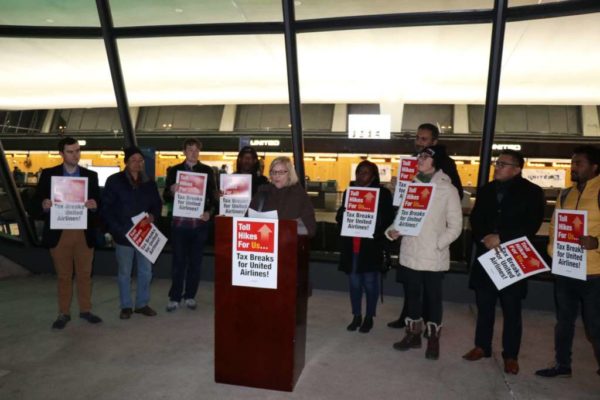 Updated at 9:52 a.m. — United Airlines said that it does not receive a special jet fuel tax break.

Del. Elizabeth Guzman unveiled a bill yesterday that would lower the tolls on Dulles Toll Road, one month after the toll hikes were approved for next year.

The bill would offset some of the upcoming toll increases by ending what Guzman calls United Airlines’ “jet fuel tax exemption” and directing that roughly $4 million per year toward the Silver Line project, which is currently funded largely by tolls.

That revenue could cancel almost 9 percent of the scheduled 2019 toll increase, according to a press release from UNITE HERE Local 23.

“United Airlines does not receive a special tax break and pays the same jet fuel tax as all other airlines that serve airports in the Commonwealth,” Kimberly Gibbs, a spokeswoman for United Airlines, said.

Gibbs added that the second phase of the Silver Line “will benefit residents, employers and businesses throughout the Dulles corridor.”

In Virginia, larger airlines like United Airlines pay less per gallon in taxes on most of the jet fuel they use, the press release says.

The Metropolitan Washington Airports Authority Board of Directors voted Nov. 14 to increase rates on the Dulles Toll Road for the first time since 2014 to fund the Silver Line extension project and improvements on the Dulles Toll Road, according to the MWAA. Starting in January, the hike will raise the toll from $2.50 to $3.25 at the main toll plaza and from $1 to $1.50 on ramps.

The bill responds to community concerns about the increasing tolls, which are expected to rise to more than $11 by 2043 without alternative funding, the press release said.

“Virginia continues to face a transportation infrastructure funding crisis,” Guzman said. “But Virginia commuters should not be asked to accept higher tolls to fund transit projects that benefit United Airlines, while the airline receives millions in state tax breaks.”

Dels. Kaye Kory and Lee Carter, Virginia AFL-CIO, UNITE HERE Local 23 and CASA in Action, joined Guzman by the windows outside the United Airlines ticketing counters on Wednesday (Dec. 12) at 5 p.m. for the announcement about the bill.

Supporters of the bill argue that the Silver Line project will redirect more of the consumer air traffic market to Dulles International Airport, bringing an additional $66 million to United Airlines with 1 percent more of the regional passenger airline market.

“Commuters and every other business along the Dulles Corridor are already paying their fair share for the Silver Line. United Airlines should too,” Doris Crouse-Mays, president of the Virginia AFL-CIO, said.

Tonight I proudly stand with @unitehere23, @NovaLabor, @CASAinAction, and my colleagues in the House of Delegates as I introduce legislation for the 2019 session that will reduce tolls on the Dulles Toll Road. Thank you @NBC4DC for the coverage tonight. https://t.co/Vry7w3vjUP pic.twitter.com/WN9PPkz0yV

No more tax breaks for @united while we get toll hikes! @delegateguzman pic.twitter.com/F7ZGGE6Gnz