A little more than half of Reston’s capital projects were finished this year, with the renovations of the North Hills tennis courts among the uncompleted projects.

Forty-six of the 84 projects slated for 2018 were finished, including the Hook Road community engagement project, Lake Audubon dredging and the 2019 Reserve Study.

Schumaker said that rain and “difficult weather” delayed several projects. The tennis courts faced a “stumbling point” when a tree fell on the courts, he said.

By a 3-2 vote in late October of 2017, the board approved up to $295,000 in improvements for North Hills tennis courts in response to concerns about limited lightning in the evenings and major cracks that run along the court. 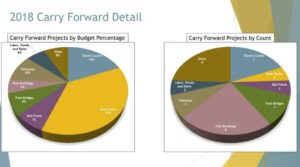 The irrigation system and court grades require a “significant modification” to ensure proper operation and quality of play for the next 30 years, along with lighting design changes.

The project jumped from an originally estimated cost shy of $300,000 to a new estimate just under $400,000. Schumaker said that the current cost estimated happened in the latter half of the third quarter.

The board debated on moving $95,500 of unused money from the Repair & Replacement Reserve Fund in the 2018 capital budget for the tennis courts.

RA At-Large Director Ven Iyer said that not sticking to the budget sends the wrong message and makes the RA look fiscally irresponsible.

Caren Anton, who represents Hunters Woods and Dogwood, said that using the money “is a no-brainer.”

“It’s unfortunate that the extent of the renovation was not identified accurately at the beginning,” Anton said. “The funds are there. I think it’s imperative that we take care of this to make the courts safe and more attractive to the senior tennis players.”

The board authorized the $95,500 and also authorized $52,300 from CAARF capital funds to pay for a small equipment lift, deep tine aerator and “winterization” pool covers for Ridge Heights and Shadowood facilities.

The 2018 projects cost an estimated $3.1 million and the projected carry-forward totals $2.25 million.