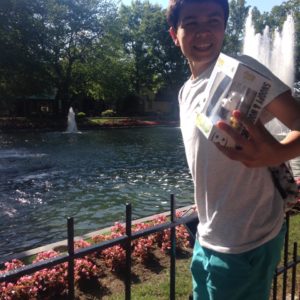 Family and friends gathered on Sunday evening at the spot where 16-year-old Marvin Daniel Cruz Serrano was killed Saturday.

They placed a white wooden cross with “Daniel” near the intersection where the South Lakes High School sophomore was struck by a vehicle while returning home from work at Reston’s Cafesano, WJLA reported.

The memorial continues to grow with several bouquets of flowers and a stuffed animal for the teen who friends called “kind and selfless.” Serrano leaves behind his mother and a 2-year-old brother.

In a message sent to the school community Monday evening, Principal Kim Retzer said funeral arrangements are still being planned.

Fairfax County Police are still looking for the driver, who fled the scene. Detectives believe the sedan involved “may possibly be gray or silver, and it likely has significant front end damage.”

“At about 5:40, officers responded to the report of a pedestrian hit-and-run crash on South Lakes Drive and Castle Rock Square in Reston,” police said in a press release. “The teen was attempting to cross South Lakes Drive… when he was hit by a vehicle. He was pronounced dead at the scene.”

The fatal hit-and-run was the 44th road death in Fairfax County in 2018 — the most for any county in Virginia last year, according to DCist.

Police are asking anyone with information about the fatal hit-and-run to contact the Crash Reconstruction Unit witness phone line at 703-280-0543 or to submit a tip anonymously through Crime Solvers.

16-year-old Daniel Serrano’s grief-stricken mother nearly collapsed during the vigil for her son who was killed by a hit and run driver. This was an incredibly emotional story to cover. I broke down in tears.
Fairfax County Police are searching for the driver. pic.twitter.com/1098jCvFAD

The memorial for 16-year-old Daniel Serrano continues to grow. pic.twitter.com/AMVBupkGw7

Family & friends tell us 16yo Daniel Serrano was a cashier at a restaurant in Reston. He worked hard to help his family. They say he was coming home from work and crossing South Lakes Dr. when police say a driver hit him/didn’t stop. Serrano didn’t survive. @fox5dc pic.twitter.com/SfEelex8xP

More Stories
Lane Closures Near Reston This WeekLetter: The Folly of 15