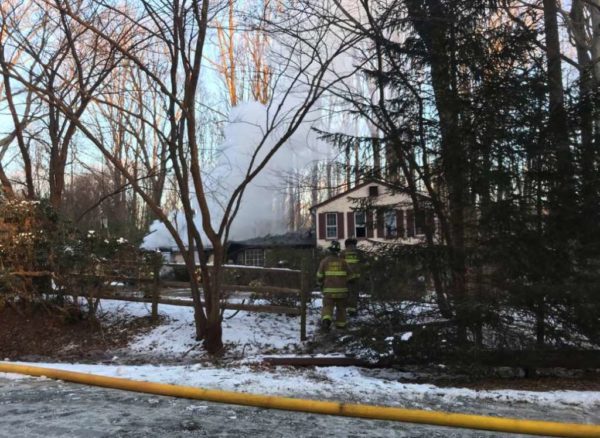 A GoFundMe page is raising funds for the family displaced after a fire broke out in their home in Herndon yesterday.

The campaign, which was created and activated today (Feb. 1), aims to help Tim Gaffney’s family cover the costs of “small things that add up” — clothes, toiletries, shoes, coats and more — with the hope that insurance will cover the larger losses.

In just a few hours, the GoFundMe page has raised nearly $2,000.

The Red Cross has put the family up in a hotel, according to the fundraiser.

The GoFundMe page says the following:

January 31, 2019 Tim Gaffney woke to the smell of smoke. The entire garage was engulfed and it was quickly moving to the house. He woke Ryan and Tara and they were able to get out. Janeen and Sofia were in MA at a skating event.

Flash forward 24 hours and my oldest friend in the world and her family are homeless.

The Red Cross has put them up in a hotel and friends have rallied around them. But this is just day one.

Our hope of course is that insurance will cover the larger losses. House. Cars. Boat. It’s all the small things that add up. Clothes. Toiletries. Shoes. Coats.

We are asking for any help you can provide to get this family through the next really difficult months until they find their new normal.

Anyone not comfortable with sending money is more than welcome to send gift cards. Anything — I mean anything — will be so appreciated.

Thank you on on behalf of Tim, Janeen, Ryan, Sofia and Tara.

Firefighters had the fire under control in about two hours after arriving at the house in the 12100 block of Westwood Hills Drive around 6:38 a.m. on Jan. 31.

The three people in the home at the time of the fire were able to self-evacuate. Two of the occupants received treatment for smoke inhalation, according to the fire department.