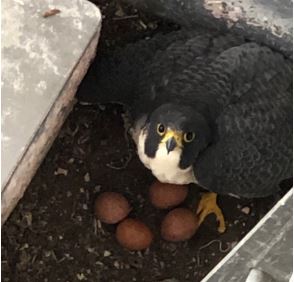 The pair are both around 7 years old and are expecting four chicks. The dad hails from Maryland while the mom came from Pennsylvania.

From today (April 22) to the end of the week, readers can vote for the two names from this list of readers’ suggestions.

The winning names for the mom and dad falcons will get announced at the end of April.