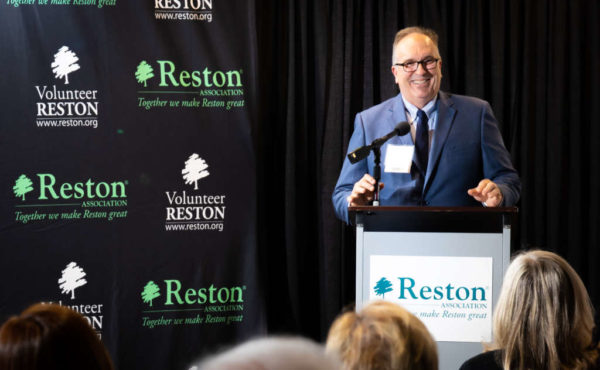 When Hank Lynch — a trained horticulturist and arborist — came to Reston to fill the long vacant position of Reston Association CEO a little over three months ago, he knew the community “needs protecting.”

The Norfolk resident is a newcomer to Reston — standing in stark contrast to his predecessor, Cate Fulkerson, who left after serving the organization for 26 years in different roles. In the coming months, Lynch hopes to bring a fresh set of eyes to the quasi-governmental association to reimagine RA and its members, all while preserving what makes Reston unique.

Lynch’s executive experience is largely restricted to the environmental sector – a characteristic that he says is relevant to Reston. He was the CEO for Farm Sanctuary, an animal protection organization that advocates for farmed animals. He also held leadership positions at the National Maritime Center in Norfolk and Stan Hywet Hall & Garden in northeast Ohio. He has undergraduate and graduate degrees in horticulture, including design, public administration and museum management, from the University of Maryland and the University of Delaware.

“It’s got a very strong tie to make sure the environment of this community is maintained in a very healthy way,” he said.

Lynch said RA should consider modernizing its operations and services instead of maintaining the status quo. He is working with RA’s communications team to find an outside contractor who would help RA determine how its membership pool has changed, what the community’s needs are today, and exactly what RA’s members want and need from the organization.

For Lynch, backing decisions based on data instead of personal opinion is the most healthy way for an organization to operate.

“The last time RA can look back from when it did something like this, it was almost 10 years ago,” Lynch said. “And the community has changed dramatically.”

Right now, his office is gearing up for the next operational budget and a new strategic plan for the association.

Lynch also hopes to find more ways to generate revenue without relying on assessment increases. In response to questions about revenue generation from the Lake House, Lynch said it was too early to speculator on how to generate revenue. He expects to work with RA’s Board of Directors to explore different ideas.

“There’s never just one thing that solves a problem or a challenge like this. It’s always a lot of little things and how you maybe weak some programs,” he said.

Lynch said one of his top priorities is to maintain low assessments. Solidifying Reston’s identity, however, will require give and take. RA will have to determine its niche as a community organization without duplicating services and programs offered by others in the community.

As the seeds planted by Reston’s Comprehensive Plan bring more mixed-used development to the area, the horticulturist is hopeful Reston’s roots will remain strong. Lynch says that the community has welcomed him in the “most professional and gracious way in any job that I have taken.”

So far, Lynch — who follows a plant-based diet — is embracing Reston’s beauty and uniqueness, he said. As he bikes in the area, Lynch said he hopes Reston’s unique identity remains preserved.

“We can set it as an example of how other communities should function.”