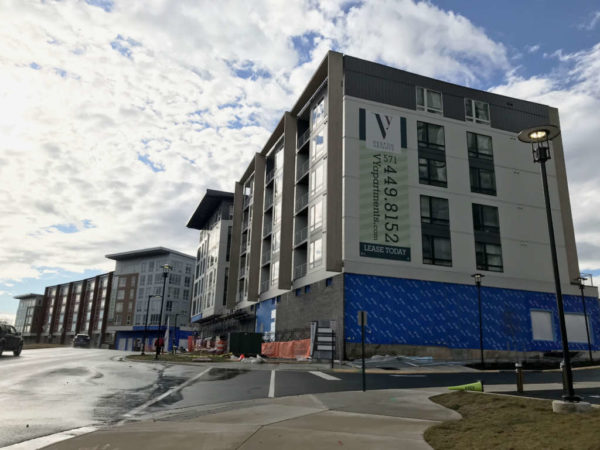 The mixed-use development at 11830 Sunrise Valley Drive is currently developed with the 385-unit VY apartment community, the Reston International Center office building, and a parking lot. JBG Smith wants to remove planned office space as well as 3,600 square feet of retail on the 10-acre parcel.

Mary Cortina, an at-large commission member, said JBG Smith should consider stormwater management on the site — even though its latest plans do not remove any pervious surface.

“The reason I bring this up is that we have continued to make this case to the public and to others that as we redevelop these large parking lots and put in more mixed use that we’re actually improving the environment,” she said.

Hunter Mill District Planning Commissioner John Carter said the plan should include more trees, which are depicted in project renderings.

“I want the street trees,” Carter said. “This area of Sunrise Valley Drive is completely barren on all of the projects that have been done in the past. We must fix that.”

The owners of 7-Eleven, which owns the Exxon gas station neighboring the site, also raised concerns about lack of access to a shared driveway to the site, leaving large trucks and cars to maneuver dangerously tight curves to get onto Sunrise Valley Drive. Otto Konrad, 7-Eleven’s attorney, said that talks between the property owners have stalled.

Shane Murphy, JGB Smith’s legal representative, said JBG Smith is willing to work with the owners of 7-Eleven to secure access to an easement.

Carter said maintaining access between the two parcels is critical. “It’s the whole secret of this so-called grid of streets to work,” he said.

It’s not the first time development plans for the site have changed. Reston Heights was first approved for 498 residential units, 245,000 square feet of retail and 430,000 square feet of office space. Since then, the number of buildings has been scaled back.

The Planning Commission votes on the project on May 8.