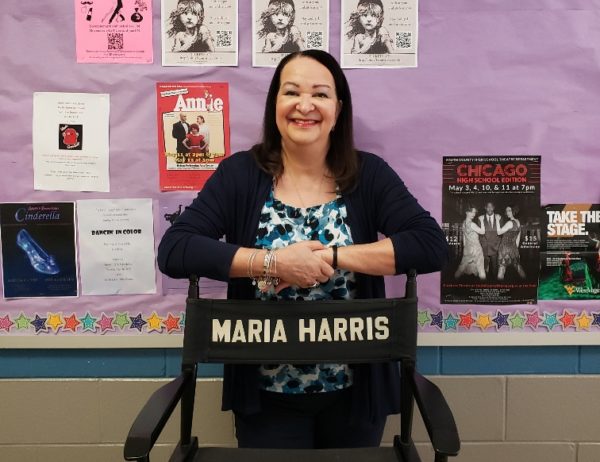 A force behind more than 150 performances at South Lakes High School’s Theatre Arts program is leaving the program. Maria Harris, the program’s theatre arts director, plans to retire after 30 years of coaching students, putting on productions, and watching the program grow over the last three decades.

Harris is now turning toward what she calls her final act: her own acting career and production company, Rising Star Productions, and spending more time with her family and aging parents.

“It’s been a good career, but it’s not over yet,” Harris said. She commutes two hours daily from her home in Loudoun County to SLHS.

After teaching for a few years in Michigan — where she was born — and two other Fairfax County schools, Harris landed a full time job at SLHS. She’s worked as the performing arts chair and taught speech, english, theatre and film — watching the program grow from two shows required per year to an around-the-year program. The job has given her the opportunity to travel with her students — including the prestigious American High School Theatre Festival in Edinburgh, Scotland where the school was selected to represent Virginia. Her students have also won two state championships in the Virginia High School League’s film competition.

Over the years, she said she has most enjoyed watching her students grow. “I’ve really enjoyed my time here at SLHS. I love, love, love my kids and I’m going to miss them the most.” Before shows, she assembles her students into a big circle and leads them through breathing exercises, passing a squeeze of good wishes down the chain of linked hands until they reach her.

Ryleigh Line, one of her students, told Reston Now that Harris has helped many students realize their full potential.

“The most important thing that she does for us is support us and she pushes us to be the best we can be by having high expectations and constructive feedback for us after every assignment and production,” Line said. “The South Lakes community will miss Mrs. Harris very much and are forever thankful for her.”

For Harris, who calls herself a “Motown girl,” the arts were ingrained in her lifestyle since she was five. She received her bachelor’s degree in education from Wayne State University.

While she was working in the school’s program, she launched Rising Star Productions in Reston in order to fill the lack of “cultural theatre” in the community. For years, she worked with her team to bring African American Theatre to Reston Community Center. She has appeared in films including Broadcast News and Accidental Tourist.  Her stages roles include Addapearle in The Wiz, Bloody Mary in South Pacific, Asaka in Once on This Island, and Myrna Thorn in Ruthless! The Musical.

“I wish my students the very best, whether they take their careers into theater or whatever they endeavor to do.”